My last post got the local expat crowd going on the issue. One of the posters brought up the recent news, from the Japan Times, that pension compliance is Japan is hitting record lows. 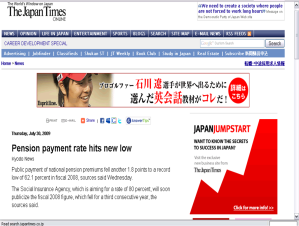 (That’s 18-year-old pro-Golfer Ryo Ishikawa in the banner ad by the way. Maybe folks back home have heard of him, since he played with Tiger Woods recently. He is the king of the banner ads at Japan Times this year.)

I don’t disagree with anyone that Japan’s pension system has its problems. It’s a mess and one of the reasons that “Mister Nenkin”, Labor and Health Minister Akira Nagatsuma has a weighty role in the new Minshuto-run government.

And compliance is really weak. That’s because of the shades of gray that has surrounded the program in Japan. It should be one of “Hoofin’s Laws” that when shades of gray are introduced to anything in Japan, watch out!

I tried to do an Excel sheet to represent geometrically who is paying, who is paying in arrears, and who just isn’t with the program. The picture came out like this: 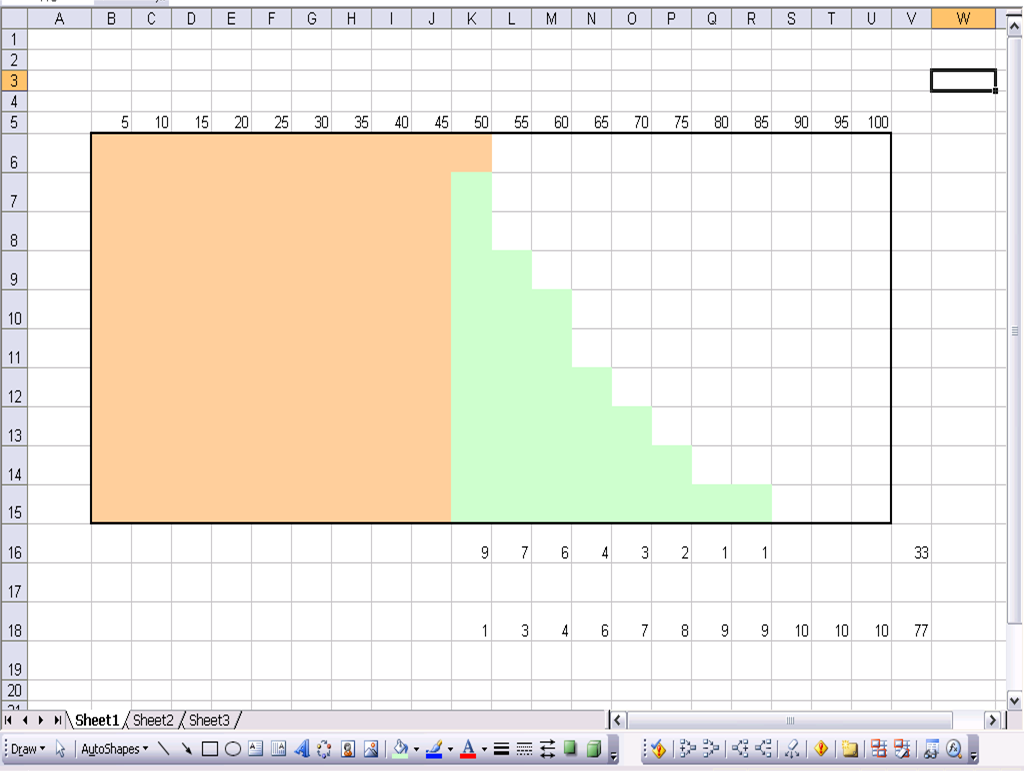 It’s a little fuzzy like all the Powerpoint images I make into pictures, but the main idea is there. The beige represents the Japanese who are paid up in full according to the Japan Times article. The spring green represents how compliant the rest of the people are. (This is to say, the spring green range represents the payments being made by everyone else, which are not at 100% in a two-year period.)

I even tried to guess how this would look by age, if every age cohort had about the same amount of people (which wouldn’t be so, but): 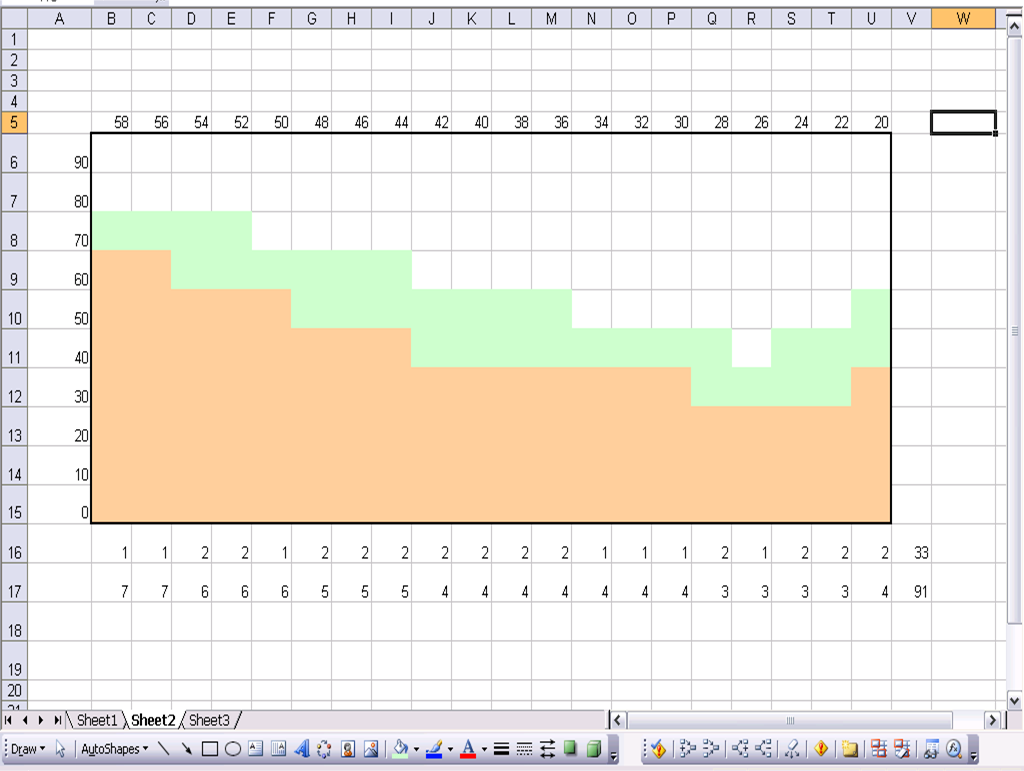 This is admittedly not perfect science. But if you are trying to see visually what a 62.1% total compliance rate (and 45.4% perfect compliance) is, it would look something like that. [Added note: this is just the Kokumin Nenkin, and does not include employer pension.]

So the non-shaded areas represent the non-compliance.

Keep in mind that the prior Japanese government said this summer that they would be happy with 80%. So 20% of the rectangle would be blank in the J-government best case scenario. Only in the perfect world is the thing 100% fully shaded—everyone paying up and on time.

The pension dodgers in the foreigner expat community (the close cousins of the health insurance cheaters and sometimes the same person!) point to facts like these as the excuse simply not to participate in the Japanese pension systems.

Simply because there is a minority of Japanese who for whatever reason are not paying up is not much of a good reason why people in the foreinger community should just not pay. For the Japanese, I think most reasons go to the lousy employment situation for young people, and other folks who for whatever reason can’t make the payment. I think a large part is the fact that it is a coupon system, and not wage withholding.

I don’t understand how other advanced countries can administer something like this without any problem. Yet Japan, usually with the fastest computer in the world or close second, can’t manage to get a program together and collect the information it needs to run it.

About a month or two ago I went into how many countries have totalization treaties with Japan, and that participating here is part of the larger scheme of things to be covered throughout your career.

Most of the social security totalization treaties require Japan to provide for pension coverage on an equal basis that it offers the citizens here. I know that’s the case with America and Canada, and probably Australia and France. In my view, this means it should also be done without having to have a big negotiation or fight every time one gets a new job.

And without having to entertain all the shades-of-gray arguments that pension dodgers will put up to say why foreigners in Japan should be exempt. And the arguments are both emotional and convoluted.

More on the social security totalization in a bit.

Some say the opposition’s reasons to paying pension premiums are well-founded and sophisticated, but because they assume a lot of things that aren’t really legitimate, I’d still say they’re more like convoluted. One is to say that making foreigners comply with the mandatory pension program is a discrimination if Japan does not similarly press its citizens to pay up. But as reported, the compliance rate is 62% [on Kokumin Nenkin]. So unless foreigners also are required pay up at least 62% of the pension, how is this discrimination? It looks more like a shades-of-gray argument that since people resident here are non-Japanese, they should be able to let slide on the thing. Right?

And the indications are, Japan is about to really press the people who don’t pay anything in to start chipping in something. That will happen well before the consumption tax is raised to fill the gap. (Why should the vast majority who at least contribute something have to turn around and pay more at the sales counter for those who don’t?)

When it comes to money and paying things up, the rules will always be a little different for foreigner visa-holders. Simply because they are indeed from someplace else, and might go back there! (Try to collect then, eh?)

To me, the whole pension dodge issue, which comes back again like heartburn every now and then, is a sad sideshow to the real issue, which is that Japan is not doing a good job of opening the shakai hoken coverage to Americans. We have to argue with the crybabies who want to dodge the pension system, rather than work with the new government to make sure the Social Security totalization treaty terms are respected.

With regard to the social security totalization treaties, Japan made representations and commitments about its pension system the citizens and officials of the counterparty governments have a right to rely on.

And one of them is equal treatment about eligibility and participation in those plans. If Japan lets counterparty citizens slide, it just forces the public welfare systems in the counterparty countries to make up the difference in the future.

As far as I can tell, next month Japan will be 4 years late in so far as its promise with America. The U.S.-Japan totalization treaty came into effect October 1, 2005, and it said equal benefits and responsibilities for Americans in Japan. Yet please tell me how many dozens and dozens of Americans work in Japanese companies where they aren’t enrolled in shakai hoken on an equal basis?

It’s right in Article 3 of this treaty text.

1. Persons who are or have been subject to the laws of one Party, as well as family members or survivors who derive rights from such persons, who ordinarily reside in the territory of the other Party, shall receive equal treatment with nationals of that other Party in the application of the laws of that other Party regarding entitlement to and payment of benefits. However, the foregoing shall not affect the provisions on complementary periods for Japanese nationals on the basis of ordinary residence outside the territory of Japan under the laws of Japan.

The annotation to this adds:

Article 3.1 provides that persons to whom the Agreement applies who reside in the United States or Japan will be accorded the same treatment regarding benefit rights under that country’s social security laws as that country accords its own nationals. This provision is not intended to affect the coverage provisions of either country’s laws, since these are dealt with specifically in Article 4 of the Agreement.

When you have crybabies and internet philosophers going on about how or whether there should even be (evvvven beeeee!) programs of social insurance, it makes it a little difficult to get the things your own government already negotiated for . . .. ehem . . ..