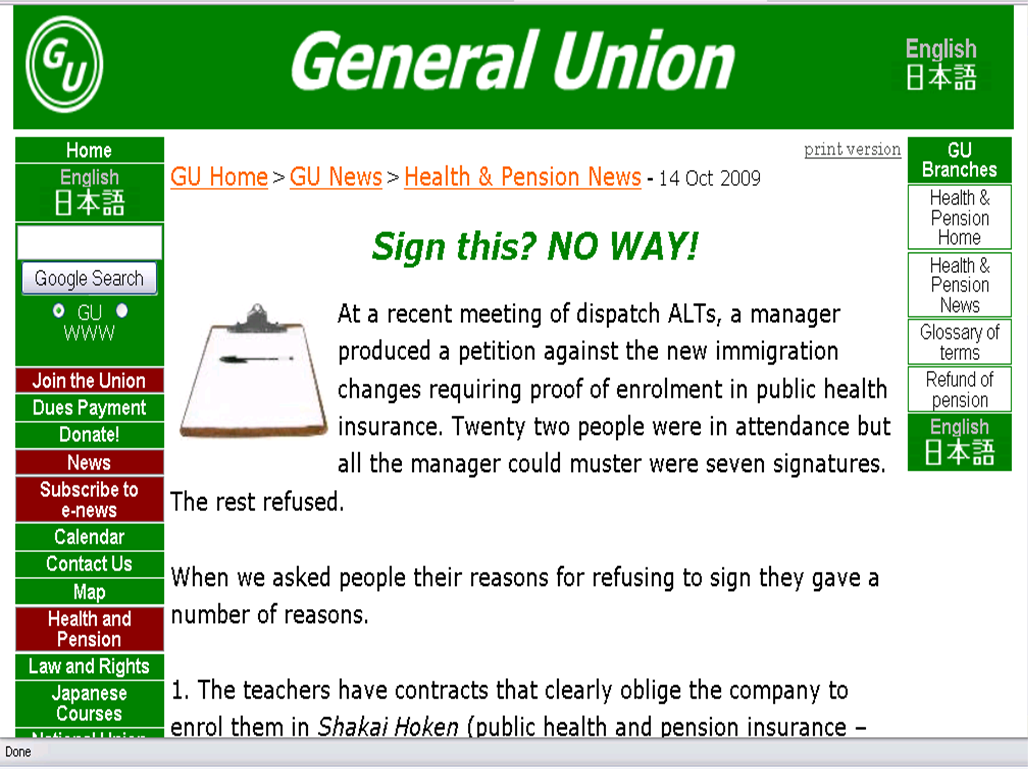 I am particularly fond of the General Union Osaka’s website for day-to-day information about working and living in Japan.

A few years back, I had considerable involvement in the Tokyo branch of this union, website here, but the information that comes across the Osaka branch one is much more relevant to everyday. When Tokyo “Nambu”, as it’s referred to, ever does update their site, it’s usually with the headlines that have already been reported out. There isn’t any, well, real-time blogging or these anecdotal reports.

It may be that the guys in Osaka are doing this for the whole foreign labor community–not just Osaka. I don’t know. I don’t know why they haven’t linked to each other’s (Tokyo and Osaka’s) site–even including the one in Fukuoka–with a banner so that visitors realize they are three affiliates of the same union.

See? Try this one here to the left–it should work.

It’s the internet, of course, so even what seem like borders are really just seamless patches of the quilt. But if you are a union, the value of the internet is getting your message out cheaply and quickly. Not making it too difficult for the visitors to learn what they need to from you.

I know my own blog is not the height of organization, but it’s a blog. It’s just me, you know.

Well, on to the matter: the post I snapshot above at the Osaka site is talking about this whole health insurance for the visa renewal matter.

The protester group, Free Choice Japan, sounds like it had organized a petition drive, and the General Union people got wind of it.

Me, I would not sign a petition like that–aside from being covered by National Health Insurance anyway. You can imagine that anyone signing on who doesn’t have the right coverage is probably going to get asked, at some point, where their coverage is! But the other reasons the GU says were given are equally legit:

2. They also objected to feeling pressured to sign something with which they didn’t agree.

3. They didn’t trust the motivations of FreeChoiceJapan who are organizing the petition.

4. They also believed that it was just a waste of time and would have no effect on the implementation of the new guid[e]lines by April.

As one of the few expat bloggers in Japan discussing the issue, I guess I get a number of hits throughout the week on the question. (Like I have the definitive answers, right?) My advice to people is to try and get into National Health Insurance and the National Pension, too.

If you never enrolled in a health insurance here, then, yes, you are probably going to get questions about where you were the past two years. I don’t know what to say there. Some people think you can use a friend’s address and say you just moved into the prefecture, but I think at some point that might present its own problems. (For one, you’d have to update the torokusho, and someone might notice the different address.)

With the National Pension, I know that you can be two years in arrears–it says so on the coupon. So you can enroll in November 2009 and make December 2007’s payment. They might try to squeeze two years at once out of you, but probably highly unlikely.

If the health care protesters were doing really well, you’d see it reflected on the site. What information they’re giving out (an October 27 fax from some lawmaker) only suggests what everyone concluded: that the Justice Ministry (immigration) would not deny someone a visa renewal in the absence of a legitimate health insurance card. But most people take this as a thin reed. They will probably still inquire about your status, and my feeling, here, is it’s the equivalent of being asked for a card.

You don’t really know how many people signed the Free Choice petition. I get the sense it’s really small, or you’d hear numbers.

The General Union is keen on supporting the rights of foreigners in Japan to be properly enrolled in the better, employee’s health insurance part of Shakai Hoken. So the GU’s focus is to support things that would encourage this result.

The Free Choicers, like I’ve blogged about, seem to want to get around paying into Japanese insurance, because the premiums are based on income.