Friends are kind enough to invite me to the family restaurant Saizeriya on regular occasion. It’s one of those chains that’s everywhere. In most every one I’ve been to are hanging various prints of Renaissance paintings, like Botticelli’s “The Birth of Venus”.

Since Saizeriya bills itself somewhat as a trattoria, it might be that the artwork is meant to set the tone and flavor, that you are stepping into one of those Old World Italian cafes, even though the actual environment elsewhere around you is saying “fast-food efficiency” as if Ray Kroc himself were in the back room.

But one print that’s baffled me for weeks is of the Last Supper of our Lord. 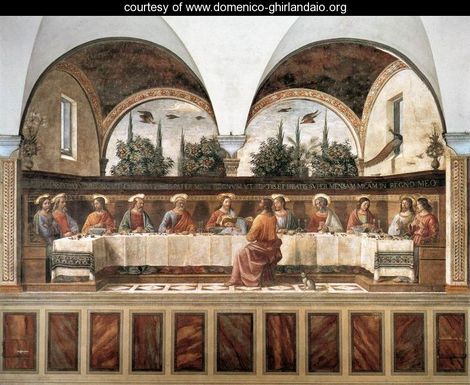 I knew this was not Leonardo da Vinci. But who?

Well, an easy Google search did not give the answer. It turned out I had to research four or five Last Supper paintings before I learned the true artist: 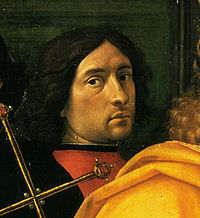 According to the wiki, Ghirlandaio was at one time a teacher of Michaelangelo. He was mostly commissioned by wealthy bankers of Tuscany and most of his surviving works are in the region, although he had earlier been commissioned by Pope Sixtus the Fourth to paint in the Sistine Chapel.

As to Ghirlandaio’s style and legacy, the wiki says:

Ghirlandaio’s compositional schema were simultaneously grand and decorous, in keeping with 15th century’s restrained and classicizing experimentation. His chiaroscuro, in the sense of realistic shading and three-dimensionalism, was reasonably advanced, as were his perspectives, which he designed on a very elaborate scale by eye alone, without the use of sophisticated mathematics. His color is more open to criticism, but such evaluation applies less to the frescoes than the tempera paintings, which are sometimes too broadly and crudely bright. His frescoes were executed entirely in buon fresco which, in Italian art terminology, refers to abstention from additions in tempera.

I’m afraid that’s all a bit over my head, but I guess it sounds about right. To me, he paints like someone of the Flemish school of those days, especially the realism of character portraits and what he does with window scenes when they are part of the work. The “Last Supper in San Marco”, as this one is known, reminds me of some the Flemish collection at the Cloisters in Upper Manhattan (this is maybe about 30 years on, but I’m sure it’s still there). In fact, that’s why I had a hard time figuring out who painted it. I was sure the Japanese hadn’t touched the piece up, but it didn’t seem like the same time and place as other Renaissance painters.