Following up on yesterday’s post, I have also identified the artist responsible for this painting: 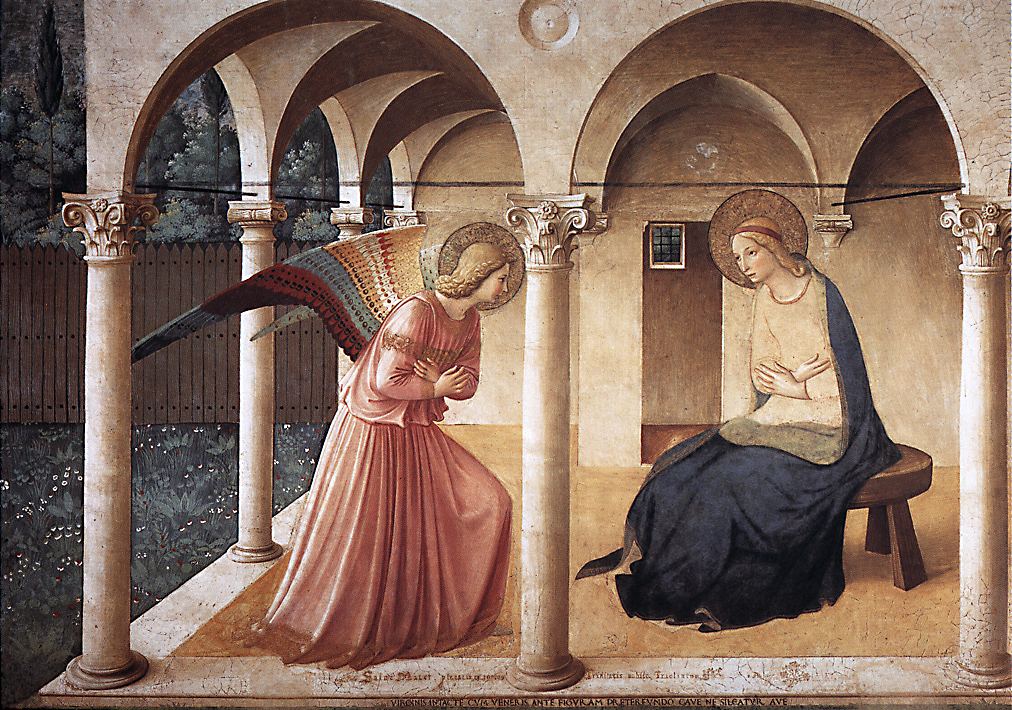 Here’s a version of the story that inspired him, originally by a Greek physician named Luke, (in a language that wasn’t around at the time):

In the sixth month, God sent the angel Gabriel to Nazareth, a town in Galilee, to a virgin pledged to be married to a man named Joseph, a descendant of David. The virgin’s name was Mary. The angel went to her and said, “Greetings, you who are highly favored! The Lord is with you.”

Mary was greatly troubled at his words and wondered what kind of greeting this might be. But the angel said to her, “Do not be afraid, Mary, you have found favor with God. You will be with child and give birth to a son, and you are to give him the name Jesus. He will be great and will be called the Son of the Most High. The Lord God will give him the throne of his father David, and he will reign over the house of Jacob forever; his kingdom will never end.”

“How will this be,” Mary asked the angel, “since I am a virgin?”

The angel answered, “The Holy Spirit will come upon you, and the power of the Most High will overshadow you. So the child to be born will be called holy, the Son of God. Even Elizabeth your relative is going to have a child in her old age, and she who was said to be barren is in her sixth month. For nothing is impossible with God.”

What makes this painting of the Annunciation wonderful is the look of surprise, the expression in Mary’s face. It’s very real and down-to-earth. Maybe that the painting is from the mid-15th century (1438-45?), early Renaissance; it keeps some of the hardscrabble sense that had to have existed in Europe after the calamitous 1300’s.

Notice the angel, Gabriel, God’s chief courier, with those funky wings. He must have done some time traveling to the 1960’s in his delivering the word of God. Coincidentally, he is the agent who delivered the Koran to Muhammad, in Muslim faiths.

Speaking of Islam, the story of the Annunciation appears there, too. In sūrat āl ʿim’rān (The Family of Imrān), commonly called Surah, Chapter 3, verses 43-48 say:

O Mary! “Submit yourself with obedience to your Lord (Allah, by worshipping none but Him Alone) and prostrate yourself, and Irka’i (bow down etc.) along with Ar-Raki’un (those who bow down etc.).”

This is a part of the news of the Ghaib (unseen, i.e. the news of the past nations of which you have no knowledge) which We inspire you with (O Muhammad SAW). You were not with them, when they cast lots with their pens as to which of them should be charged with the care of Maryam (Mary); nor were you with them when they disputed.

He will speak to the people in the cradle and in manhood, and he will be one of the righteous.”

She said: “O my Lord! How shall I have a son when no man has touched me.” He said: “So (it will be) for Allah creates what He wills. When He has decreed something, He says to it only: “Be!” and it is.

I’ve always been impressed by this depiction of God via our Muslim friends. To the question of “how?” asked by Mary, the messenger says, “How?? This is what God wants! If God wants something, God just says, ‘Be!’ and that is that.”

In Luke, the news is given by the chief angel who says to Mary at the start that “God is with you.” In Surah, an unspecified angel says: do what God wants.

Luke was a little more gentle in the depiction, a bit more feminine in a way, in how the story is told. Also, since he was telling the story of a man who would not only have God-like powers, but also be God, there is this emphasis in the Annunciation that “with God nothing is impossible.” (Often this is popularly quoted as “with God all things are possible.”) In Surah, the emphasis is instead that God chose Mary to deliver Jesus in a special way to demonstrate God’s power, as well as to be a prophet of God.

Just as critical Bible theorists emphasize that Luke, as a Greek, was writing to an audience that would include Greeks, (that is, people who believed in gods that had special powers and worked miraculous things), I suppose that Koran theorists would suggest that the Annunciation was included to appeal to Christians who might become followers of Muhammad.

The Story of Imran (Sura 3) shows that all of the characters of both the Old and New Testaments mentioned were favorable to God (Allah), and that many of the events that were told among Christians were in fact acknowledged in the newer religion.

(Note: I use the Mohsin Kahn translation found at the University of Leeds site.)

One thought on “The Annunciation at Saizeriya”