Saturday, I blogged about how I heard former Labor and Health Minister Akira Nagatsuma at the local community hall in Uehara. While reading the Press Minshu (official party newspaper of the Democratic Party of Japan) on the train Sunday, I came to realize that I had not understood something from the meeting. Nagatsuma-sensei had not obtained an additional portfoliio last month, but in fact had stopped being Labor and Health minister.

There is very little written in English here about Nagatsuma, even though he is one of the most dynamic of the politicians in the DPJ govenment. As readers know, I am better at English than Japanese, so there is probably a ton of news about what is going on with him in Japanese. What surprises me is that there is so little in English. 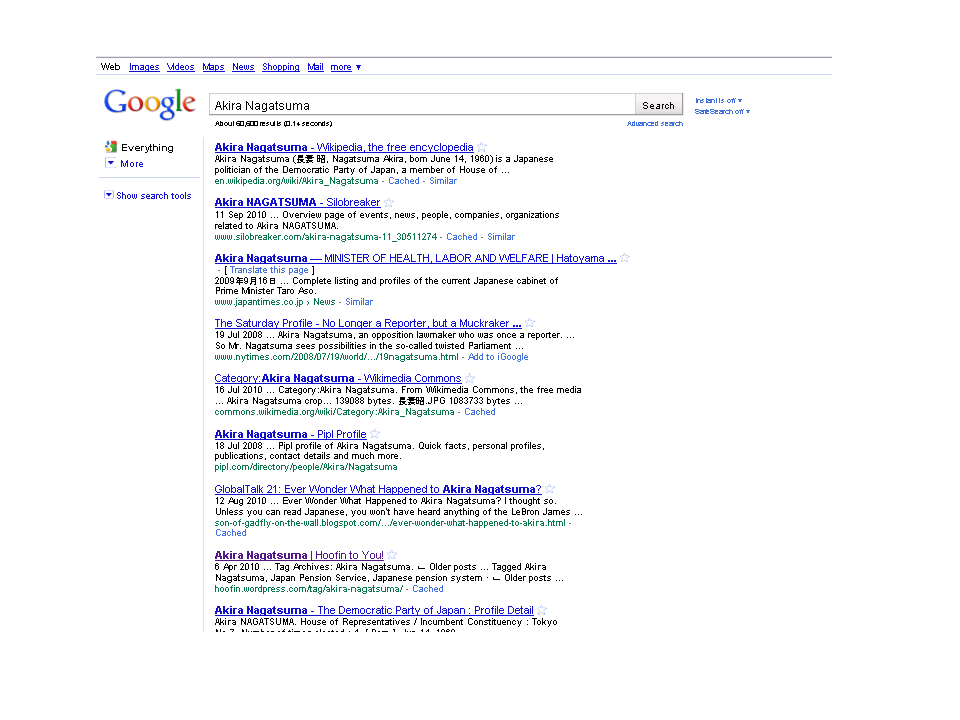 For example, on a Google search, I am front page. I know people read me, but my numbers can’t be more than 1,000 a month. So I am in the “long tail” of bloggers out there. Another post!

Back to Nagatsuma: So, I started asking around to my Japanese friends and acquaintances about what had happened. It turns out there are numerous opinions–one for every person I asked. Some feel that the Bureaucracy got to Nagatsuma, and he was knocked down through internal scheming. But others say, no, he is actually being brought in closer to Prime Minister Kan’s inner circle, as a kind of “hosokan” (補佐官) if I have that right. A top minister, but without specific portfolio. If so, that’s a much more powerful position, because in practice you are acting for whatever the Prime Minister wants; and all the games that go on in any bureaucracy (the stonewalling, the blame shifting, the backstabbing) tend to subside whenever the Prime Minister’s man shows up at the door looking for answers.

The nice manila envelope that I was given had this expression on the front:

which I understand to mean, basically “yeah, I can’t shut up! [or: be quiet!]”, in the sense of there being a bad problem that needs fixing, and somebody’s got to say something.

A YouTube clip of that phrase puts you here:

So I really don’t know if last month’s change means Nagatsuma is going up, or is going down. But practically, it seems for the work that he has put into the matters of social insurance support over the past year as Minister, and previous years as an advocate for pension reform, if it’s a choice of the two, Nagatsuma would be going UP.