This is one I did sometime last year, too.

A Facebook friend pointed me to a website of a hobbyist-linguist, who is duplicating the Labov Telsur map of North American accents. It supposedly is a project to link YouTube examples of accents throughout the U.S. and Canada.

Being Somerville, New Jersey area born and bred, I am of course always interested in what the armchair linguists have to say about the “Jersey accent”, which is actually (at least) four different kinds, three of which are Midland.

So I checked out the website’s big map:

Let me blow this up a bit so that you can look at New Jersey, compared to nearby regions:

And a bit more, so you just focus on “Joisey”:

What Aschmann is saying is that once you get past the skyline area of North Jersey (where the people allegedly have New York City accents), the rest of North and Central New Jersey have people who sound like the ones in Upstate New York! (I guess that’s supposed to make sense, since that part of “Joisey” borders that part of New York.)

The vast middle of the state, where it’s not Pine Barrens, is filled with people who sound like they are from Philly. This obviously is lifted from Labov’s work, except I think Labov was making a generality about the influence of Philadelphia speech on the region’s Midland accent. Why the drawer didn’t decide just to include Cape May County and far South Jersey in that is a surprise—those regions are even farther from New York than Mercer or Camden County.

I managed to screenshoot the example that Labov provides at his website: Homepage of the TELSUR Project. This one gives a much more accurate drawing of the Midland region on the East Coast. The arrows, which I added, point you to what the map says is the border area of where the Midland accent predominates: 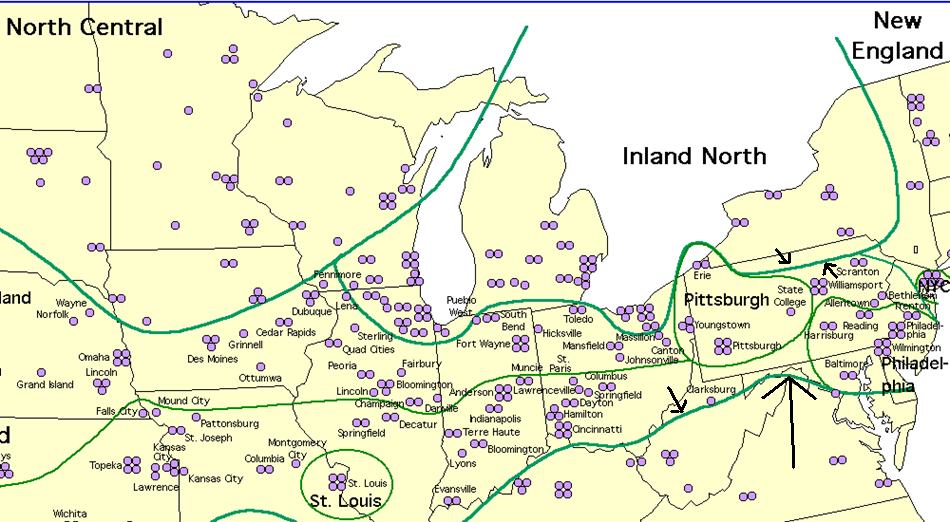 Here is the blow up of New Jersey:

In short, this rendering (really the original of the Aschmann work) is the more scientific and the more humble. As you can see, most of the entire state of New Jersey is in some form part of the Midland region. There is a thinner green line, covering South Jersey and a good part of eastern Pennsylvania, representing the influence of Philadelphia vowel sounds and other localisms. Speech mannerisms of the Inland North are not predominant in North Jersey at all. Nor are they in Northeastern Pennsylvania.

The other thing I like about the original work is that it is consistent with history. For most of its existence, the population of New Jersey mostly lived in six major cities. The rest was farmland. So once you left the immediate New York City metro region (i.e. got past Newark), or Philadelphia (got past Camden), you were out in the heartland. I would say this was true up until the Interstate Highway System in the 1950’s. Only then did you start to have the contemporary New Jersey of subdivided tract lots, malls and corporate office parks.

My Facebook friend wonders what gets me in a “tizzy” about this. You know, after years and years of putting up with people’s stupidity about a state and its “accent”, you hate to see a bunch of myths propagated via the internet. It’s bad enough that Hollywood and New York comedy media have spent decades casting New Yorkers and their own peculiar ways of speech as New Jerseyites. I believe this popular Snooki from one of the reality shows based in New Jersey is just the latest in the long line of faux New Jerseyites. People leave Brooklyn for the Jersey Shore, and the first thing you know, they are exemplars of the “Joisey Culture”. (No, they’re New Yorkers who simply need to get on the Parkway and find their way back to their real home.)

If the armchair language scientists really wanted to be forthright about it, the truth is there isn’t much scholarship going on about the various speech styles and practices of New Jersey. It’s a place that people like to stereotype but not study. It’s only interesting as a myth, if you don’t know anything about it.

If you have been there, and you do know something, though, you can’t help but feel that the people expounding on the “New Jersey accent’ are at best misguided. But in many Tokyo expat parties and get-togethers, just a pack of blowhards and know-it-all frauds. Something about the “Joisey accent” leads these people to forget that it’s only their opinion that they’re putting forth. They talk as if “Joisey” is some kind of scientific fact, not something invented by Godfather movies and Joe Piscopo.

It’s like they’re trying to convince you that man didn’t land on the Moon, and by about the 50th person you meet with that, you know you’ve heard it 49 times too many.

And these people who think it’s all about whether you call a hoagie and sub aren’t where it’s at, either.

So my New Year’s wish is to see an authentic New Jersey accent webpage go up. But I’m not holding my breath.