This one has been around the net over the past 24 hours:

How I understand that it is supposed to work, is that executive branch employees are called, from time to time, to give a report or some testimony to Congress. The person giving the answers is the employee of the executive branch officer. Ultimately, this is President Obama; although, I think in this instance Elizabeth Warren reports to Treasury Secretary Tim Geitner, and then from there the chain goes to the President.

Ms. Warren had agreed to answer questions with Committee for a set time period. Several of the Republican Congressman did not appear at their Committee duties in that hour, and so they wanted Ms. Warren to stay over time. She would have missed her next scheduled meeting. That’s what this is about.

If you remember back to “You Lie!” Congressman Joe Wilson of South Carolina, I have to wonder what the problem is of particular Congressmen not respecting the executive branch. They really seem to have a problem with that.

Besides the simple fact that Ms. Warren’s official appointment as head of the consumer watchdog bureau has been held up by the Senate (the other legislative branch), like so many other critical Obama appointments, makes this YouTube scene particularly unsettling.

The Republicans have been stepping all over the Administration since January 20, 2009. They show no respect for it, whether they are in the majority or the minority.

Why should anyone respect them in their antics?

[Update: It’s that expression, right around the 1:05 mark in the YouTube clip, that makes the encounter emotionally drawing, or pulling. McHenry has absolutely no respect for Ms. Warren, and it shows in her face as she reacts to the insult. 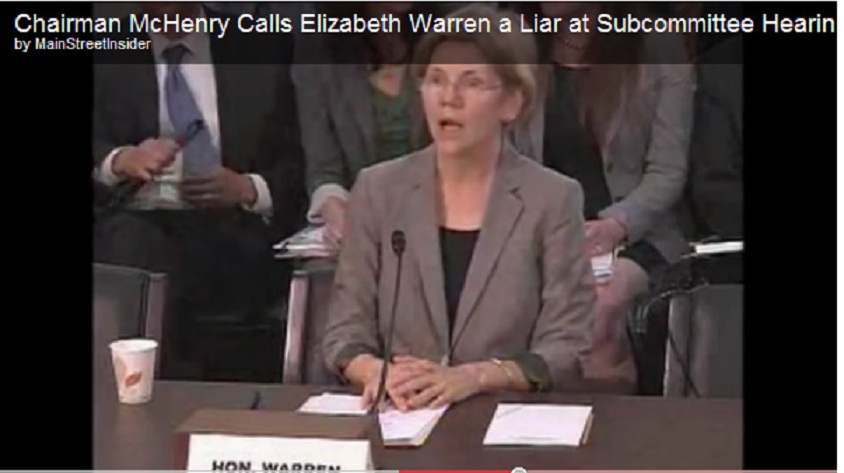 Huffington Post has a bit up, with more information.