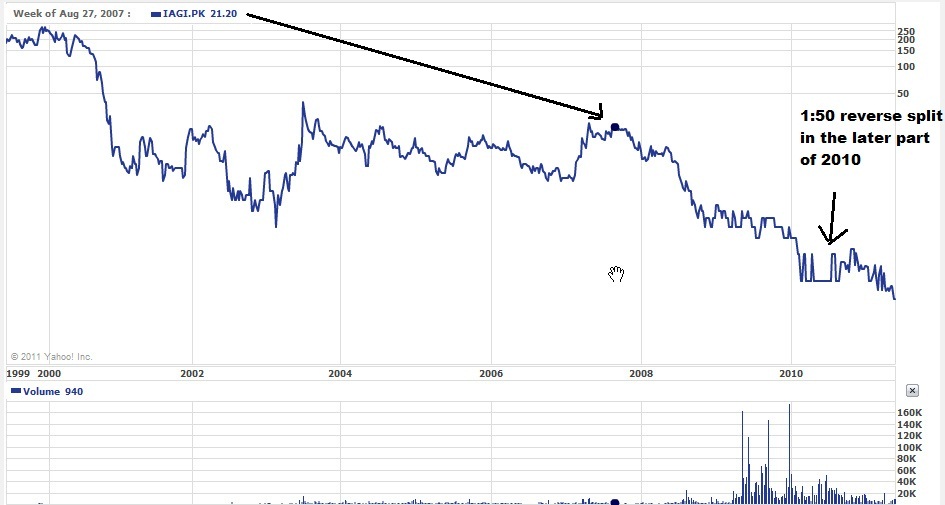 Another one in my GPlus Media series of posts.

You may recall that I mentioned that IA Global was once the 25% owner of GPlus Media, parent of GaijinPot and Japan Today websites. They had done a deal in September 2007, where IA Global received 250 shares of GPlus Media, in exchange for a large amount of IA Global stock. One contract online that I saw had the number as around 3,000,000 shares. These were pre-reverse-split shares, so this would be 60,000 of today’s IA Global shares. The transaction would have been valued at around $1.2 million, based on the stock’s $21.20 value at the time. (More or less figuring here–I know they don’t add up exactly.)

When the transaction was unwound in early 2009, IA Global sold to GPlus management for $75,000 and booked over a million dollar loss.

IA Global also bought an outsourcing firm from Terrie Lloyd, using this instrument, among several others, in late 2007 and early 2008; and entered into some kind of “alliance” with LINC Media, that we have never heard about again.

Additionally, they had put money into Esprit, another, Roppongi-based Japan-side outsourcing firm. Nothing was ever heard about this one, either.

Did any of these three endeavors make any money for IA Global?

The company still exists. You can visit their website. But everything that they did in Japan sounds like it was a big money loser. Nothing panned out.

Can somebody please tell me that I’ve missed something here?

This is a company that, at one time, had a reverse-split value for its stock at around $250. It now trades on the Pink Sheets for 25 cents.

A lot of this Japan headhunter and online media business talks a great line. But they do not walk the walk. I cannot find any independent confirmation that any of these firms have been able to break into the Japanese market with some positive, long-running success. Instead, I see what amount to cash burns. Or revenue bubbles that can’t last.

What am I missing?