I had posted about Ascendant last year. Here is a screenshot of the announcement at the website: 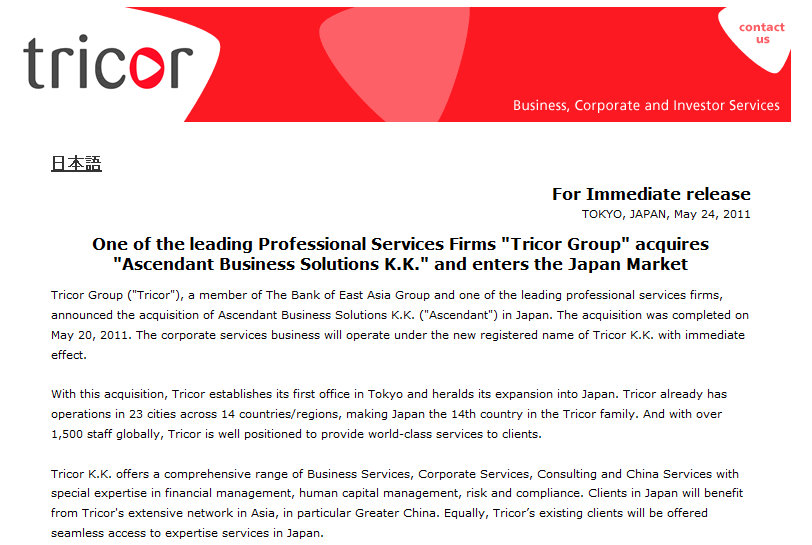 Tricor is a professional services firm that is connected to the Bank of East Asia in Hong Kong, which is controlled by the Li family there. So it’s a solid enterprise.

Ascendant, as I had written last year, was, on the other hand, something that seemed a bit touch-and-go. They had admitted to having 15% turnover, after having grown from a staff of 10 to one of 80. I happen to know, better than most Americans, exactly what the level of accounting talent is in Tokyo, so it made me wonder how the firm was going to go forward in the future, when it couldn’t fill the bench in these days.

I interviewed with them in the summer of 2009. I was told that they subsequently lost a major client, and so therefore could not extend an offer. At the time, I wondered if it wasn’t better to do it the traditional way—hire the staff first, so that you don’t lose clients.

The other thing that was plainly obvious, was that the Japanese seniors in the firm were the “gray beards”–those that had the knowledge and experience. The people who offered the thing of value. The foreigners involved were the pitchmen, trying to line up business by “allying” with the American Chamber of Commerce in Japan. What must have been, is that the guy starting out as a receptionist sold the gray beards the idea of making their boutique accounting services firm into a “professional services firm”. Things didn’t turn out as planned, and so they needed to be bailed out by a more solid company in the field.

I conclude this based on some other information in the Tricor announcement:

It says that the stated capital of the new firm is 18.2 million yen, or about $225,000 in current U.S. dollars. Seventy percent of this money is being provided by Tricor, so about $158,000. Thirty percent is what remains of whatever ownership continues from the original Ascendant Business Solutions.

This could mean either that the remaining $67,000 is all that Ascendant had left, which I think is unlikely, or that the partners who held the $158,000 stake sold their stake to Tricor. I think this is more likely.

Of course, if you buy a services business, you don’t want the people or the “relationships” to leave. So there is, no doubt, other consideration involved in keeping the “team” in place while Tricor bails them out of whatever situation they worked themselves into in the past several years. But you know that the price to Tricor had to be on the low side. If a company claims to have 150 “multinational clients”, is each client worth $1,000 a pop in stated capital? Hey, I’d like to buy a client base like that.

The new owners–a bank–will obviously change the math on all of that. This company will go from seeming (outwardly, to observers who can analyze a business) to be screwing around, to one that runs ship shape. This was no doubt a good move for Tricor/Bank of East Asia–and for the talented gray beards who wanted something for their efforts.

[Update: I realize that “stated capital” may not be the same as the actual market value equity of the firm. But if a major Hong Kong Bank is putting in money, via a subsidiary, why would they have an incentive to play, well, Terrie Lloyd games? I don’t think the actual sales price for the 70% stake was any different than what the bank’s sub said they are putting into the operation. It’s a huge bank. Why spin a tale about a piece that is, proportionately, small beans?]