In Japan, I began to catch the Rachel Maddow show to find out what was going on in America.

Most times it’s no problem, but tonight, for some reason, the website wouldn’t give me the installments after the (required) Merck commercials. They are reminiscent of the “I am an American” public service ads from the days of 9/11. Merck is trying to humanize itself as a company, but their advertising department doesn’t appreciate the fact that people watching Maddow online will see the same commercial for 50, 60 times in the week. I almost have the thing memorized. 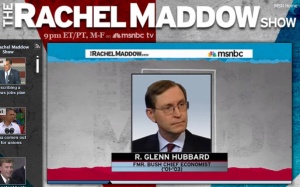 Tonight, she is talking about how the so-called Bush tax cuts of 2001 and 2003 were the major fiscal policy failings of the last 10 years. That is for sure. Now Glenn Hubbard (not to be confused with L. Ron Hubbard), the man who advocated this mass gutting of the U.S. treasury, is advising presidential candidate Mitt Romney.

The 2000’s were an economic disaster, in whose ill effects we still live, and probably will for several years.

If Barack Obama wants that second term on schedule in 2013, and not 2017 or later, one thing he’s got to do is set out how he is going to fix the mess of the Bush years. What the president has been doing is extending the Bush years and kicking the can down the road. Everyone knows this. He needs to end the Bush years.

Am I missing something? No compromise, just end.