This goes to a comment here about web traffic, and the Long Tail Blogosphere. 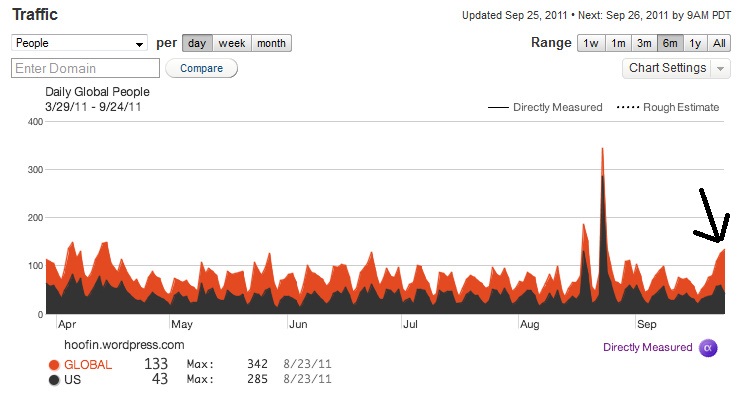 I had pointed out that a site run by someone in Japan, was not heavily travelled except the maybe 12 people. The site linked to mine on Thursday, I believe, and my page count went way up above the norm. (So, to put number on it, 400 pages as opposed to maybe 130 or so.) I said something like, “it’s really just 12 people hitting the site for multiple views, and that my Quantcast number–which registers computer visits–will barely move.”

Sure enough, the numbers have been:

So as you can see from the graph, it’s nothing earth-shattering. Then, you have to consider that some of the move is from the people who follow the other blog (the one the blog site targets), which is not being updated for the commentary that you see in comments here. Comments drive the blog world.

This tells me two things:

One, that the sending blog is really just a paper tiger, a slam blog–not a general interest blog about Japan issues. (I had concluded that already, last year.)

I am a math geek, and so these sorts of things are just fascinating. We all know about the weekend cratering that most long-tail blogs do. The people who read from work aren’t at work. The people who don’t do much online on the weekend stay away from the computer, to be replaced by those who do.

I think part of my Weekend Crater will be filled by those who have been following the two blog pissing match. But, from the 10,000 foot level, look at how very tiny it is.

And to my regular readers who want the variety back, I promise I will be back on message shortly.

[Update: Ironically, quite a bit of traffic this weekend is also coming from the fact that the Church of the Good Shepherd, Rosemont, (Pennsylvania) took their website down. [Update within the update 9/30/11: that web address was owned by a parishioner in the departing faction, which is why you now see it pointing to the Newman group.] Sorry, I don’t know why, but I assume it has to do with the fact that Father Moyer lost the case, and the faction that was not supportive of his group didn’t have control of the website.]

[Update #2: Against my better judgment, I did happen over to the Tepido site (where I have fifteen “views” from, already, in the Monday GMT cycle that started at 8 pm EDT). What the graph above shows is visits from Quantcast-identified sites. Not page hits. WordPress tells me only page hits. So it can be three people each visiting five pages–and that is about what it is. A few of the Tepido Twelve, maybe.

Tepido guys, you must look at it from my perspective: if everyone had been agreeable, I would have gladly agreed to a cut-and-paste of the comment thread over to that site, and deleted it on mine–with instructions to go over there. See the point? Go over there.]

[Update #3 (9/26/11): A reader has asked about the two recent weeks with more prominent peaks. I think these are mostly due to writing I had done about the IBM versus Visentin case. This was the case where IBM tried to hold Giovanni (John) Visentin to a noncompete contract that U.S. District Chief Judge Loretta Preska in Manhattan said was overbroad. Visentin was recently promoted to a high end position at Hewlett-Packard, and so a number of people had Googled him.

The other peak may have been due to the unusual weather and geological events we’ve been having around Pennsylvania. I have to look into that one again.

This is the kind of blogosphere that I write in. It’s particular issues that suddenly take on an interest in the general public. Like books, most of the writing is done well in advance of the ultimate reader reading it.]

[Update #4 9/26/11: While I am here, there have already seen a few more objective commenters out there about this whole Tepido vs. Debito, Japan-expat-side cybercommunity spat.

Here is what a New Zealander who writes by the name of Hikosaemon had to say last May:

Another one is from “John Taro”: http://johntaro.blogspot.com/2011/06/blog-wars.html

You see, this is one of those online bickering things, and two other commenters have made it clear out there already. Hiko, who apparently uses the internet a lot to communicate, understands the Debito “phenomenon” very well. But, if I summarize him correctly, he points out that what Debito was originally using the Net for made sense. Now, the program, of sorts, does not seem to be as fresh, let’s say, as it was in the late 1990’s and early 2000’s. This dovetails with my commentary about how the approach is very much like the politically correct activism of the 1980’s on East Coast campuses–especially in the Ivy League. How awful and grating that was! This is a criticism I have already said, and so I just point it out as a reminder.]

[Update 10/4/11: As time did tell, I got a modest bump up in views the week of this original post, but nothing dramatic. This is where the expression “Tepido Twelve” came from. It’s maybe twelve active BBS posters, and then the lurkers who read and follow them. If I didn’t want to really waste time, I’d parse out how many of the hits are from the several days when the Good Shepherd, Rosemont (PA) parish website was taken down by the dissenting faction, only to reappear directing to something new . . . 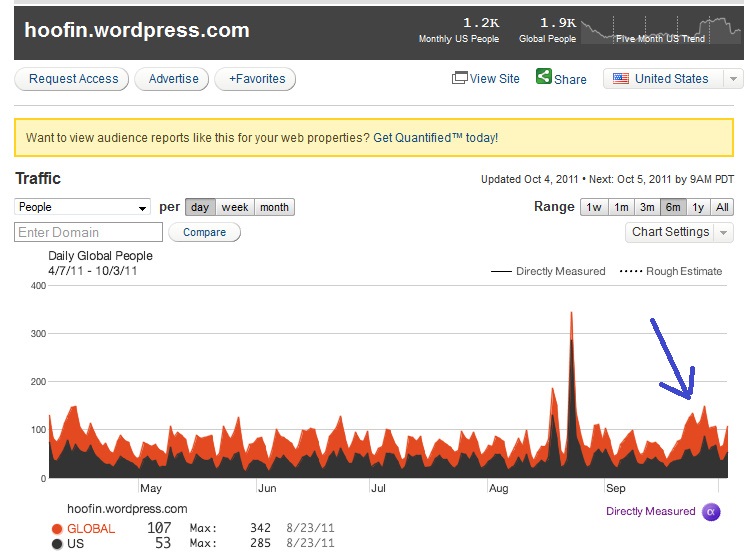