Or a trivia question.

You may remember that during America’s summertime phony debt crisis, the Congress decided that the way to fix the tax and spending policy logjam in Washington was to punt the hard decisions to a “supercommittee”, made up of half Republicans and half Democrats.

Naturally, since the parties–especially the Republicans–aren’t much for finding answers, the Supercommittee has proceeded to draw lines in the sand for their “work”, too.

This is because America’s tax problem is almost 100% due to the so-called Bush tax cuts, which we could never afford to do. They gave relatively small cuts to almost everybody, but huge ones to extremely wealthy people—the 1% inside of the 1%. These tax cuts are temporary, and were meant to expire at the end of 2010. If a real stupid deal, Obama agreed to extend them to 2012. But on January 1, 2013—less than 13 months from now, those cuts disappear.

Once those cuts would disappear, so-called “current law”, the deficit will also mostly disappear.

If you are tired of this small-bore issue with big, big implications, you should be in favor of letting these cuts expire, as I am. To help the middle class, Congress can take up new law in 2013. Until those cuts go away, the Republicans are always going to have an incentive to do exactly as they have been in recent years. And you see the mess it has been making.

[Update 11/19/11: Here is a link to the research that supports the $7.1 trillion in deficit reduction that the current law—the law that has the tax cuts expiring—will produce. (Center on Budget and Policy Priorities) 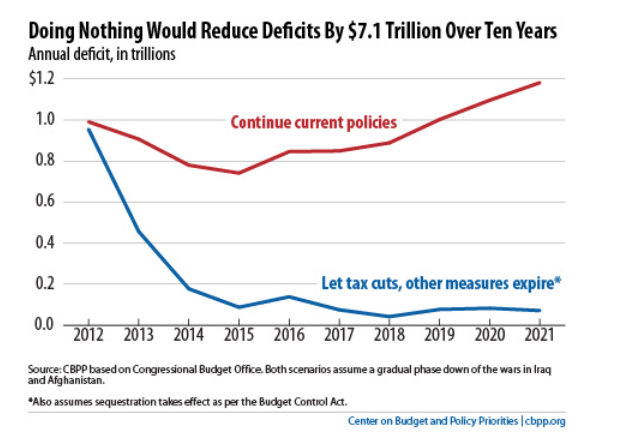