A picture that, if anyone didn’t know any better, you’d think came out of some sci-fi movie of a future fascist America. 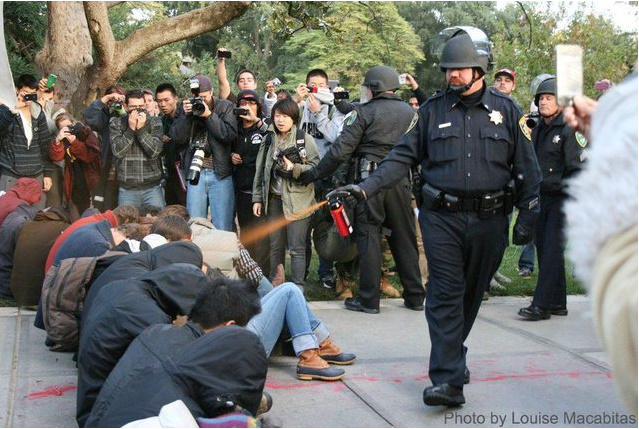 One thing you know for certain, is that the attitude of this police officer did not evolve overnight. This is the attitude of police on university campuses, and has been for some time. This attitude is fostered by the administration of these schools. Students who do not do what the administration wants are seen as potential threats. And then the bullying tactics begin to be employed.

I don’t get the commentators who say, “well, at least, this isn’t Kent State!”, referring to the 1970 police murders on that Ohio campus. These people seem to be suggesting that anything shy of being shot dead is somehow O.K., given a circumstance where a school administration is upset. But, to me, that just looks like more lords and serfs. I mean, look at this picture: the cop, whose salary is being paid by the student’s tuition and loan money, has utter contempt for the people he is assaulting.

Here is the clip of the University of California Davis head (Katehi) being walked to her car. What an allegory for this woman’s career after this point. (She is going to have to be politically walked to her car until she resigns.)

She’s got that kind of walk and attitude of a certain kind of higher education official who is living with her own set of facts, like Temple’s Adelaide Ferguson back in the day.