For people who follow the American Super Bowl, you might know that, for many years, it was a total mismatch between two teams–one from the old American Football League and one from the National Football League. This was before they became “Conferences”.

I used to enjoy the Super Bowl as a kid. It was usually held sometime around my birthday. And–if my birthday was a Sunday–sometimes the very day (1969, 1975).

Maybe around 1983 or so, the game got incredibly stupid. You remember? It was more often than not a mismatch, and that’s also around the time the commercials and the half-time show took on a lot more significance. Clearly, those contemporary “traditions” come out of the fact that the panicked network was trying to figure out ways to keep the viewership.

Well, something interesting has been happening with the game over the last 10 years: 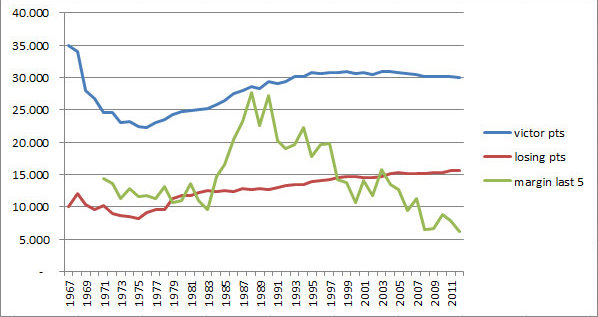 The point total by the winning team has stopped tending to this blow-out number, like 46 or 55. The losing team has steadily been scoring more (giving them the chance to have been the winner, had other parts of the game played out). And the margin of victory is on this downward trend. I am charting the last five margins, as a lagging average. So 2008-2012 (’08, ’09, ’10, ’11, ’12) has averaged a winning margin of just over 6 points — a touchdown.

Why did things change? Did the NFC or AFC suddenly become that much more competitive? I don’t follow football internals enough to guess.