Picking up on my post of the other day.

I have an interest in social media metrics. A few people have misinterpreted this as: I want to broadcast far and wide! No no. No.

A few others: “You’re just jealous of our place X number of hundred thousand spots ahead of you on the long-tail blogging/vlogging curve!” No no. No. 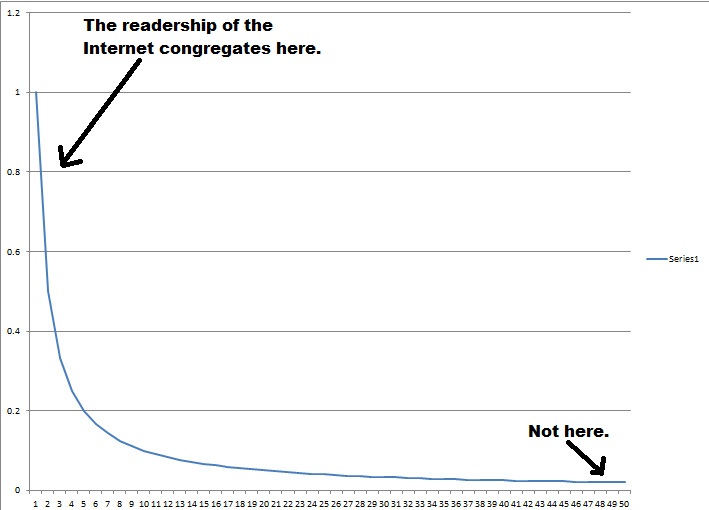 (Adjusted to make more readable. In reality, that asymptote is mostly running along the X- and Y-axes—in such a way that you wouldn’t be able to see it.)

Still others, then, don’t believe in online metrics. They think every company that comes along (Alexa, Klout, etc.) is engaging in snake oil salesmanship. Maybe but maybe not. If they can’t get a decent sample on you to form an opinion, maybe you don’t have enough there to sample.

I am keen on knowing just how “big” the Japan-side expat blogging community is. Because I doubt it’s even a couple thousand, max. And most of those transients who are running blogs from work. I wondered about local political blogging in 2003, when 10 was a lot of hits. There are no good metrics on small-scale stuff, except Quantcast if you are on WordPress. Most “great” sites that you put into a company like Compete, they will tell you: too small to measure. Or report back some very low number, which you know is mostly “passers by”.

This is a critical problem when it involves Americans in Japan, because, more and more over the last 10 years, people get their information from what they read at talk sites online. There is no adequate press reporting on the community itself. There are, of course, great outlets who report in English about Japan overall. But none reporting on what’s going on among these big expats and the companies they create and employ people through. Nothing about American government officials’ actions in Japan, unless it’s someone like Maher who catches people’s attention stateside.

I get miffed when I am pressured, off blog, to “see things a certain way” or “say this but not that!” Go back to my original May 2003 posts. It was about people coming to me, pressuring me to “say this but not that!” about Bridgewater (NJ) Township Council—that, for a readership that they would go elsewhere and say was nonexistent, and surely was no more than ten at the time.

So I don’t believe numbers about “thousands” when it involves the Japan-side expat community. I don’t believe that I “influence” or, heaven forbid, “control” any of the dialogue within that small community. And certainly not here at home in Pennsylvania.

Well, let me show you an example of what would be “big” for local website traffic here, a site that I referenced a few days ago.

Philadelphia Magazine, 11,000 hits a day, in a metro region of 5,000,000 people. Yes, Philly.com–linked to the Philadelphia Inquirer and Daily News newspapers–is probably the biggest. But PhillyMag is up there. Let’s look at monthly, so we can look at “addicts”, etc.:

Granted, there could be people’s small sites where it is a similar 750 people as “addicts” and nobody else. Firedoglake, which I mentioned the last time, is like that, but with 50,000 addicts. But normally, the casual blogger or the Mom blogger, or whoever, is just not that big. I know, I am not that big.

Usually, when I get the requests—and this year I think I’m up to maybe four if you don’t include the Left Behind Parents—it’s someone who wants to write my blog for me. Or they want to borrow my voice, and make it like it’s me saying, when it’s them. I get a little tired of that.

What I’ve decided to do is just shut people off who are up to that. This comes after a lot of thought, going back 9 years. Because I find that it’s “internet for me, but not for thee, Hoofin! I want to run my cons and scams, and spin it how I want. And (for some God-knows crazy reason) your presence on the internet gets in my way!”