Since I’m a number of hits on this for the past several days.

When I last left off, I had discovered that the Father Rector, Canon Gordon Reid was having a bit of a spat with the St. Clement’s vestry, and in their usual litigious selves, they were out there spending money, figuring out where they stood vis-a-vis canons and all that.

It is pretty clear, if you study the St. Clement’s website, that there is a big disagreement going on, and the Rector is supporting an opposing slate for the election this morning (March 4). You can read who is who, here, and let me give you the rundown of what I think is going on.

If the five candidates “nominated by the members” is Reid’s slate, he is looking to replace enough vestry so that the votes go 7 to 6. John Lilley (and I’ll leave out the various adjectives that I think describe John Lilley) finally gave up his grip on power, it appears, and resigned as Rector’s Warden.

I am assuming that the new guy, Ron Emrich is pro-Reid. So the first two vestry members on my list are Reid supporters. That means the Rector only needs five more.

Here is a handy chart: 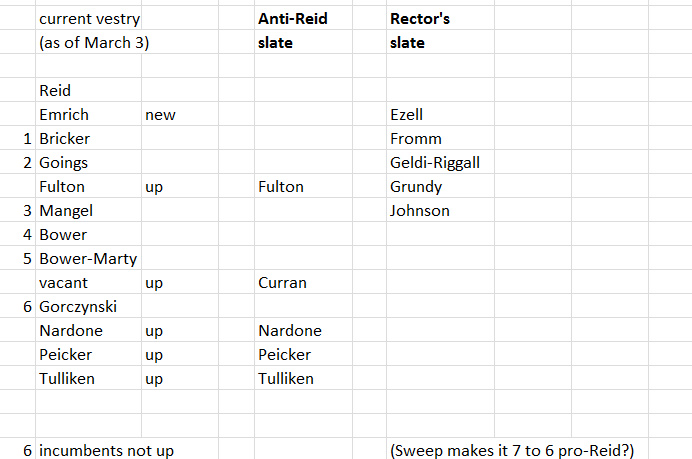 As you can see, if five more pro-Reid vestry members are added, the anti forces go down to six. Two plus five equals seven, versus six.

I have never met Canon Reid–I only know of him by online reputation and a couple of e-mails. He didn’t return my recent e-mail, so I have not been able to expand my knowledge any. But it strikes me that he knows how to play the petty Machiavellian political game at Clement’s as well as his predecessors did. So if he is putting out information on the internet about the internal squabble, he has probably done the vote counting already.

This is him, by the way:

(The tape is from when he began looking for an assistant, which is the matter that now has things riled up.)

Even if my guess is wrong, and he doesn’t have that vestry election counted, it looks like he has three other aces up his sleeve.

1) The bishop. When Charles +Bennison was deposed as Bishop a few years ago, Bennison made a spiritual home in the St. Clement’s Church. Bennison last year used his lawyers and fellow bishops to spring him on a technicality in that minor abuse cover-up of Bennison’s brother. (The panel said that Bennison’s participation in the cover-up was too long ago for him to be penalized by the church.)

So now Canon Reid has an ace in his back pocket. As I have been saying, Episcopal bishops are very useful in Pennsylvania, because the judges in Pennsylvania give Episcopal bishops more power than they actually have from the real rules of the General Convention! So Canon Reid basically has a friend in the business who can just make up any rule about what goes on in the Episcopal Diocese of Pennsylvania, and the Philadelphia Orphans’ Court judges will just go along—in “deference”. That’s pretty great (for them), and I bet it makes the Philadelphia Catholic Archdiocese—the one with its own clergy sex abuse scandal–wish that the alleged crimes of their priests could be tried in the Orphans’ Court, and not the criminal division.

So whatever rule Canon Reid wants from the diocesan head concerning the status of the St. Clement’s vestry, I’m sure he can get it.

2) A long-overdue audit of the parish books is turning up some uncomfortable findings.

As Canon Reid says, the election of the five new vestry members will mean that the audit continues. (The audit, in turn, was requested by Bishop Bennison.) Who wants to be on the other side of an audit? I wonder if they ever finally worked out the issue of the one trust fund that was being diverted from its proper use, to instead support the high school tuitions of connected members’ [children]? (That was 1989-1990).

And here is one they probably haven’t even thought of:

3) Can the vestry spend $30,000 of parish money for what sounds like legal advice given to them in their individual capacities?

It’s pretty clear, that if a 1996 Pennsylvania case, “In re: St. Clement’s Church”, says that a parish issue cannot be brought into the civil courts (note: not that the civil court must apply the rule as it exists in the denomination of which parish is a part), then spending $30,000 to figure a way around that is really ultra vires spending. It’s — what was the word? Frivolous. So shouldn’t those vestry members be compelled to put the $30,000 BACK into the parish? I don’t think that Pennsylvania Nonprofit Corporation law extends a privilege to all decision making of a nonprofit board.

It would be interesting to see how any of those three aces were played in a hand. Here, three of a kind beats the full house.