Cook Political is quite a resource. Charlie Cook is one of the better prognosticators out there on how federal races are going to go. I like to visit in election years for the things that Cook puts out that you don’t have to pay for.

About every week, there has been a new scorecard for how the races in the U.S. House of Representatives are shaping up. As you know, the Republicans control the House since last year (January 2011), and it is a two-year office, meaning that all 435 seats are up again this November.

As of yesterday, this was the breakdown according to Cook’s site:

I do my own column-and-row calculation, with the figures from each category. What is going on right now is that the Democrats would have to grab much more than just the “toss up” category to take back the House (218 seats). They would have to sweep the “Lean Republican” seats as well, and take a few “Likely Republicans” (and hold some of their own in the Lean Republican category.)

It’s not common for one side to gain seats while forfeiting nothing. I did the Democrats did this in 2006. They would really have to have a great showing in November to do it again. 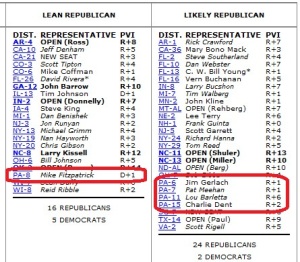 My own state of Pennsylvania has about five or six seats in these lists. Most of those are “Likely Republican”—and I know the area. Joe Pitts (R-Pa. 16th), my own guy, was in that list for a few weeks last year. This was before redistricting, which changed a lot of the boundaries to be more favorable to the Republicans. Still, there are six that have some level of vulnerability in Pennsylvania.

If the Democrats want to retake the House, they are going to have to do a lot of work here in Pennsylvania. They really need to communicate to the many people in this far-flung state how the Democrats can fix the things that Republicans have been screwing up. Republicans have spent the last three years thinking that they are screwing Obama. In reality, they have been screwing us.

I am so disconnected from Pennsylvania Democratic politics that I don’t even know if they have candidates in the districts that Cook lists. I am sure they do. But do they have bona fide competitive candidates, or just names to fill the line for the party?