I was surprised to find this a few months back. 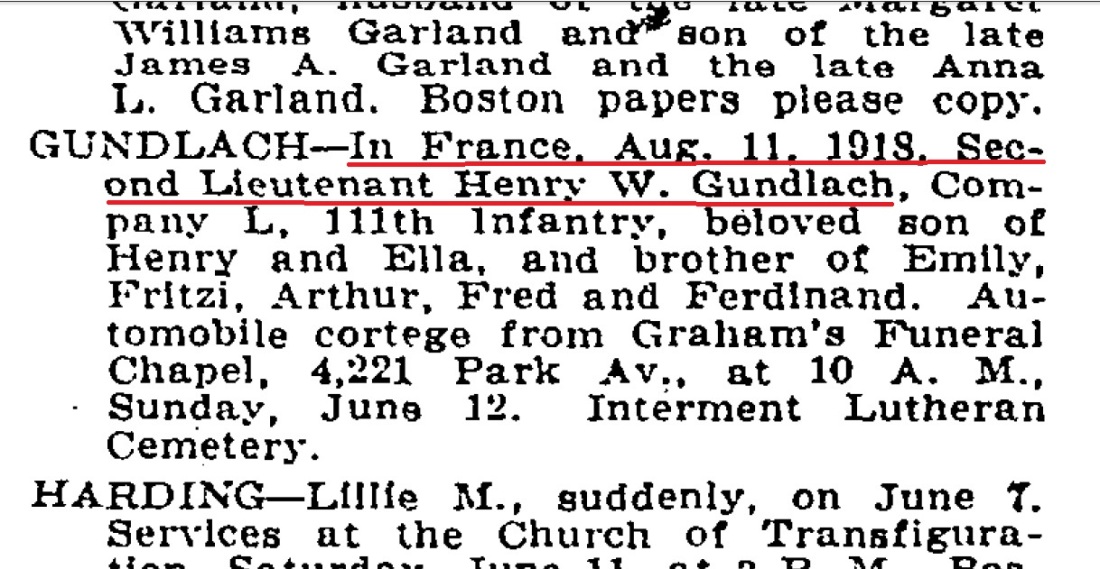 For many years, I have wondered whether the Henry and Ella Gundlach were the same Henry and Ella listed on my great-grandfather’s marriage certificate in 1911. These were Gundlachs who lived in the Bronx, in a section called Mount Hope, which is still there as a community. My great-grandfather and great-grandmother divorced at a young age, and so the only Gundlachs we knew about were people connected to either my own grandfather, or to his brother, who passed away a few years ago.

A project of mine has been to find out what happened to all the other Gundlachs listed in the 1919 obituary above. Cornell University, where Henry Gundlach attended before he volunteered for the U.S. military, had a piece about him and other students in an old publication. But most all other research has come through the charitable and appreciated efforts of the Italian Genealogical Group in New York[, and, obviously, through the New York Times above.] Volunteers in the genealogical group have worked to catalog New York’s municipal records, and make them available to the public. In the old days (1998), you had to buy CDs or have some other clue, and then ask the Municipal Archives to research for you. It was hit or miss.

If you read American history, 1918 was a tragic year. Not only did so many young men die in Europe, but also, as I mention in connection with one of my maternal great-grandmothers, the 1918 influenza killed many people as well.

[Update: According to this website, Henry Gundlach was killed in action.]

[Update 5/11/12: In the 1920 US census, Henry Gundlach, father, and the surviving family are referred to as Gundlock.

[Update 6/12/12: And now there is yet one more fact I didn’t know: Ella Grosskopf was my great-great-grandfather’s second wife—not my lineal ancestor.]