I meant to say more about this earlier.

Regular readers know that I have a low opinion of the Pennsylvania court system. I’m not the only one. A group in involved in promoting good government in the state has called for Pennsylvania to reform its system, which is occasionally referred to as an “F” (fail) in score cards.

You see, all of our judges are elected. That Commonwealth Court judge? An elected Republican. Additionally, many of these elected politician-judges are incredibly risk averse and/or incredibly lazy. The guy who had this case presented before him was probably sitting there, figuring to let each side go on for as long as he felt made it a good show. Then, go back in the chambers and red circle the legal reasoning from the brief of the Commonwealth, where he wanted the 25 year old law clerk to draft up the opinion.

It was no surprise to me that this back door poll tax was left in place, and kicked up to the Supreme Court, which is currently a 3-3 split. They, as I said, are also elected.

Some people believe that Chief Justice Ron Castile will put an end to this ID farce, since the state can’t produce enough picture cards in the remaining 82 days to satisfy the hundreds of thousands of voters who don’t have one. If Castile joins the three Democratic-sponsored judges, it would be a 4-2 ruling to end the new law. If it’s 3-3, the law will still stand.

The Voter ID mess is one more testament to the northernmost banana republic of the Western Hemisphere . . .

[Update 8/18/12: See? Jon Stewart made fun of us in a segment this week. These kinds of things always look bad to those outsiders an inch into New Jersey or Delaware . . . 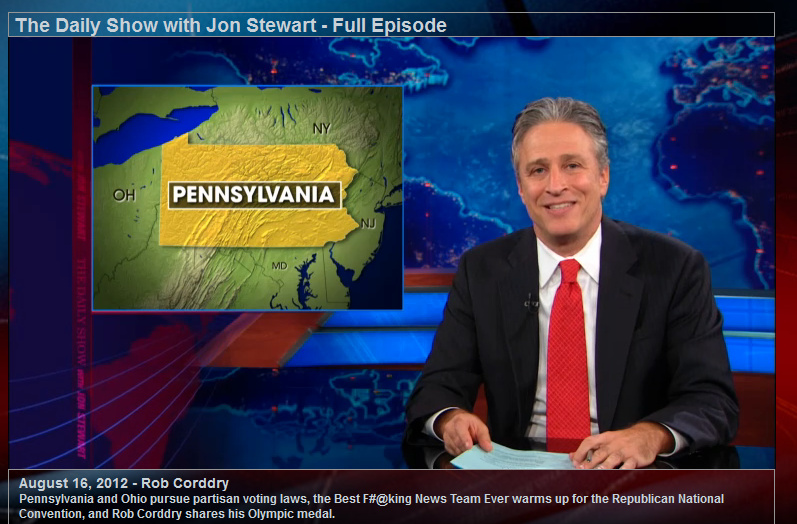