At least, this is the point I get from this Japan Times article, which is definitely worth a read, though.

My graph from the other day is not what you might call “Power Point style”, but I think it reflects the real bottom line about teaching English in Japan. As I’ve said, education is a public good. In most cases, government is in there with some support—if even that it allows nonprofit organizations to be set up to teach. But usually, they are footing the rent.

At the risk of boring you, my reader, here is the chart of METI data that I picked up using the data at Adam Richards’ Mutant Frog site.

I got my share of criticism for presenting something outside the PowerPoint world. But when the U.S. military chain of command is criticizing PowerPoint for ‘making us stupid’, you can sense the days of PowerPoint are numbered. And this goes double if you had ever seen the commentary by Edward Tufte about PowerPoint and the Space Shuttle Challenger (2003) disaster.

Tufte is famous, among other things, for this book: The Visual Display of Quantitative Information, which you used to see routinely advertised in wonkish weekly newsmagazines in the late 1980’s. His basic idea is that the presentation of ideas is often more critical than what the actual message, the actual idea someone is trying to get across, is.

What my presentations usually show is that I am a numbers geek. And maybe a wannabe modern or abstract artist. So in some ways I feel I should apologize for not really explaining out the Graph of the Four Series. But in other ways, we need to get ready for the future beyond PowerPoint. Computer technology is going to make artistic and creative, digital presentations much more common in the future than the canned ones we’ve all experienced in the last 20 years. It’s on its way.

And what that means is that people are going to have to start learning to read charts and graphs again. The kind that used to appear on glossy pages of books, with a lot of information contained in just two dimensions. And more sophisticated than a bar chart. Especially those few ones where the rectangles aren’t in proportion to the numbers being talked about.

OK, so let’s go back and look at that graph. (Click to enlarge anything you see here, of course.)

First is, I plotted for things. Based on the month, they are:

1) Revenue per class. I took the METI revenue numbers and divided by the reported classes held that month. Yes, of course, the key in Eikaiwa was/is to get people to pay in advance. But I have my reasons for showing it this way, because this is the actual “cash out” versus the number of classes being held at the time.

2) Outlets. The number of places to have a class. I am assuming that the rent on these is fairly stable—particularly as a lot of this business has been done in Kantou and around train stations. It’s usually prime real estate, where the rent would not be affected by demand for Eikaiwa.

4) Classes (in 100’s). Same deal. I take it to mean that these are the number of classes reported to be held within the Eikaiwa group. Divided by 100 so the line fits on the graph. The idea is that we want to see the pattern—it’s not so much that we want to track the actual number in 100’s. 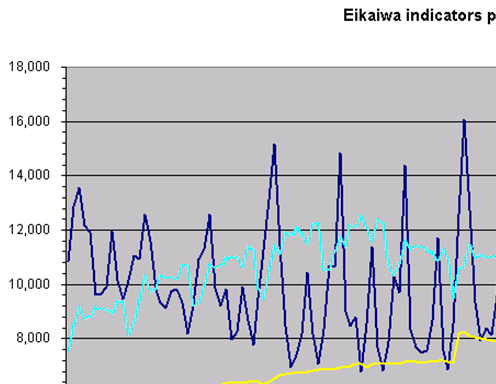 So let’s look at this pattern: the blue line for revenue per class spikes up. And the turquoise line for classes held also moves up a bit, and hangs higher in the months after the money was paid.

That the Eikaiwa industry made a big push every year, around March or April, to get revenue. Mostly, this was cash. After that, yes, they still made sales, but mostly they had to deliver—that’s the reason the revenue per class number drops off, but the actual class number stays high. People paid in advance, and were redeeming in the months afterward. As the fiscal year went on, both the amount of new sales per classes held, and the actual number of classes themselves, trended downward.

It’s not that the classes actually cost more every March or April. It’s simply that that’s when the people seemed to have signed up in a big way and either paid cash or made promises to pay. It looks like this was booked as “revenue” whether or not it was actually earned.

And this also looks like either government came in at the beginning of the fiscal year with some dough, or people made made New Year’s Resolution to learn English, bought the classes in advance, and then either lost interest, or couldn’t get the classes they wanted.

Then comes the fateful year of 2007, when Nova went under. Sometime before the actual bankruptcy, the government cut out its support for the general Eikaiwa activity. I think this was a subsidy for people who were going through job retraining or some skills enhancement program, where the government was picking up 40% of the cost up to some limit, then changed it to 20%. And maybe Nova got itself disqualified.

In any event, this is the last recent year when the levels of activity change. Suddenly, outlets, students, and classes all drop considerably. Revenue per class hangs pretty low until Nova is gone. And then the line shoots up to a new level.

Remember, this is “revenue per class”. So once the number of classes went down with Nova, we get to see what the other companies were charging to keep a typical class going. It’s clear from the graph what people were saying about Nova signing people up for lessons and then not providing the service. The graph’s blue line jumped up (money or promises in), and then it bounced back down. This pot of money kept the operation going, but clearly it was not enough to pay for everything.

So when Nova blew up, a more realistic “price per class” appeared in the data.

. . . Which leaves us with this part of the graph, the new regime after Nove (but before Geos). Interestingly, every year has a peak month (almost as a pattern), where more revenue comes in than in typical months. The amount of classes holds steady. The “revenue per class” is at this higher level, and you wonder whether it supports the number of classes and number of students. After all, students and classes dropped precipitously. But the number of outlets did not drop as dramatically.

So there’s fewer students covering proportionately more rent. Would this situation work? Well, GEOS has suggested that the answer is “no”. And surprisingly, there is still that spike that appears in the blue line—“revenue per class”. So at a special time of the year, the Eikaiwa firms were taking in extra money, and then it’s questionable what the people got for their money. Especially, since now another firm went under.

To me, this graph shows that Eikaiwa as an educational establishment is a bit of a scam. Either they never could have made this model work, or they just weren’t honest about the amount of money they would have to charge to make it work. (I think it’s the second.)

It will be interesting to see what the post-GEOS figures are. Do the remaining firms rely on a sales push or revenue grab every spring? Are they cutting salaries to make a go of it–which won’t show up on my series, of course? But would be a conclusion if nobody else goes bankrupt. Or what have you.

My feeling is that the whole industry was a holding pen for foreigners, so that Japan is not embarrassed by Japanese going overseas to live. It’s hard to be a closed country when your own people want to go live in other countries. So Japan needs something to employ the hands that would otherwise be idle here. However, they don’t want to make permanent residence easy, so they came up with this.

Sure, it hurt a lot of people who trusted that these Eikaiwa outfits were legitimate. But I’m not sure that factored into the bureaucracy’s equation. After all, look at the history of the Japanese government versus the people. The people have tradtionally gotten the short end of the stick.

And the bureaucracy and/or the government has usually responded like, “hey, don’t you people expect to be getting the short end of the stick??! What’s your problem?!”

I think the people who are the market for Eikaiwa are still so pissed about Nova, that they aren’t making a stink about GEOS because they are beyond disgusted.