As reporter Chris Johnson is finding out, Tepido.org is primarily a website set up to attack individuals for their association, at some degree, with Arudou Debito. This association can be as being the topic of a Debito post. It can be for being a comment contributor to his site. It can be for defending Arudou Debito’s obvious right to put out his opinions on the internet. And, it can be, that you are somehow a degree removed from it, too. You may have previously posted on Debito, or you may have posted on a site, where the blog author has posted. There is no logic to it. It is a game of sorts, for these people, to go around attacking, personally, whoever becomes the “it”. And this month, Chris Johnson is the “it”.

You can see, here, that I have been named as a potential “it” by (at least) one of the posters on Tepido.org: 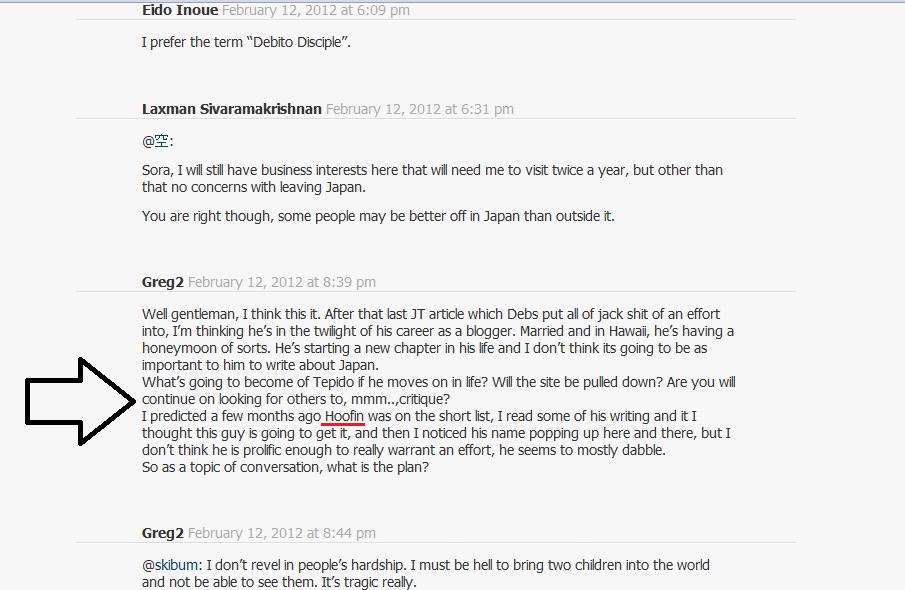 Apparently, they are “looking for others to . . . mmm, critique?”

My best guess is that Kei’s “John Doe” comes out of that Oort Cloud of bullies and social misfits. If you look at the bang-up job these characters did on Arudou, on Chris Savoie (who had posted on Debito’s), and now on Chris Johnson, and through subsidiary sites like “Billowy Kimono” and “Japan Blog Review”, you see the same pattern:

2) a TON of internet digging, maybe with the help of a Google employee who posts there;

3) a mysterious blog or other website appear, with personal criticism, libel, character assassination–whatnot. Designed to get at least some “SEO” through placing the target’s name prominently. The author of the site is either fictitious or anonymous;

4) occasionally, e-mailings out of nowhere to associated people who can be found through web searches.

Now, when you consider that Blogger Kei was a frequent earlier commenter of mine, and has had interaction (as a commenter) by pointing to at least one poster who frequents Tepido, I would say that she shook the Oort Cloud.

If you read the Philly Magazine account of it (or the complaint), you find that the feeling is: why is someone out of nowhere doing this to me? We have all felt similarly, I am sure. The simple answer is that this is what some people do. This is what they get off on. It’s funny, until the litigation hits.

[Update 2/18/12: Per my comment in response to Jane Grey, below, my sense is that the search for the “scary stalker!” begins with Kei’s comment, here:

Hmmm, who in the Tepido Oort Cloud is mentioned?]

[Update #2 2/21/12: Good to see that Google removed the blog in question. Hopefully, they just turn over the IP to the judge, too. I wonder what it takes to get the hosts of Japan Blog Review to do the same . . . ]