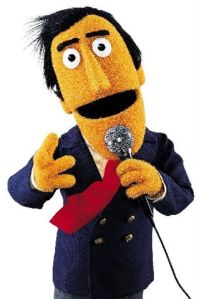 I was blogging about this one a month or so ago.

The late Mary Travers from Peter, Paul and Mary has occasionally been compared to Janice the Muppet. Some say that she was the inspiration for Janice.

I thought that Mary Travers was the inspiration for a lot of young kids in the the 1960’s and ’70’s. And so she was like the godmother of the style, you know?

She was big. And so a lot of stuff was influenced by her, and then she was said to be the inspiration for it.

But what I would like to know then is, who was the inspiration for the other Muppet characters? Like Guy Smiley?

I used to watch all those game shows on summer vacation or if I was home sick on a school day. None of the late ’60’s/early ’70’s guys from Boob Tube game shows seems to match Guy.

“Get ready to match the staaaaa-rs” Right, Johnny O?

Somebody please tell me who Guy Smiley was. He wasn’t John Kerry.