I meant to go on to non-Japan topics for a while, but this story broke. 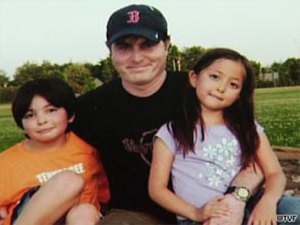 The story is Christopher Savoie was given joint custody of his two kids when he split from his wife, Noriko, sometime in the recent past. This was in Tennessee.

Noriko had the right to take the children to Japan for vacation. But not to flee the country with the children and effectively deny visitation to Christopher.

But that’s what she did.

Now it’s in the news cycle as an international issue between Japan and the United States. People who are reporting keep pointing out that Japan “never signed the 1980 Hague Convention” regarding child abductions.

The people parrot this, as if Japan signing a treaty means that Japan will take the treaty seriously in any event. I just got done blogging a few days about how Japan doesn’t cover foreigners for pension insurance on equal terms with Japanese, and that has been going on for four years—four years today (October 1) in fact, for the U.S. treaty. So it should be no surprise that in other areas, Japan simply hasn’t bothered to join an international agreement at all.

I’m reminded of an article I read in Harper’s Magazine about three years ago. It was on the comfort women (rape victim) issue from World War II.

About the relationship between Japan and America, this paragraph said it best:

Japan has always been able to block attempts to pass a congressional resolution on the exploitation of comfort women, partly because it runs a lavishly-funded Beltway lobbying operation. The Bush Administration has quietly assisted in attempts to block a resolution on comfort women. According to Mindy Kotler, the director of Asia Policy Point, a research center on Japan and northeast Asia, the Administration views Japan as the key regional bulwark against an emerging Chinese regime that may be hostile to the United States in the future. “The administration wants Japan to be a central part of America’s Asian security architecture—above Australia, India, and the British Navy,” she said. “Any issue that the Japanese have defined as disturbing has been shunted aside to ensure that nothing upsets the alliance with Japan—and I mean nothing, whether it’s a trade dispute or taking responsibility for the comfort women.” [Emphasis added.]

The article reported that former U.S. Congressman Bob Michel’s lobbying firm was getting $60,000 a month from the Japanese solely to lobby about Japan’s various World War II issues “includ[ing] claims concerning Japan’s vile abuses of American P.O.W.s, including the use of slave labor.” According to the Harper’s piece, Bob Michel was “only the most prominent of a small gang of lobbyists” that the Japan lobby paid to keep World War II issues out of Congress and the public eye.

Some time back I pointed out how in the States, lobbying money is equated by some to free speech, but in fact most of the rest of the world rightly looks at it like bribery. I happen to think it’s more like bribery, and why Americans here are looked at like affable fools who are easily bribed.

The Japanese figured this out long ago, and so these child abductions–abductions of American children by a purported ally of America–continue unabated.

It’s noteworthy that the names of the same congressmen who are willing to speak up about Japan’s transgressions show up time and again In the 2006 Harper’s piece, Representaive Chris Smith of New Jersey was one of the congressmen who was advancing the comfort women resolution until Bob Michel’s lobbying efforts worked their way into the picture.

Today, Chris Smith is one of the Congressmen concerned enough about the issue to submit a bill in the House to sanction countries that allow child abductions like this. On the Congressman’s website, Smith says:

Historically, parents left behind when their children are abducted to Japan have little hope and little recourse for justice because the Japanese government ignores U.S. family court rulings and will not honor the rights of American parents. Even in extreme cases such as when the abducting parent passes away, the Japanese government has not returned the child to the left behind parent. In fact, there is no known case of Japan ever returning an abducted Japanese-American child to the left behind parent.

It will be interesting to see how the Japan Bribe Machine operating in Washington tackles this latest one.

The obvious resolution to the problem is for Japan to recognize other country’s joint custody awards. But I have the feeling what will happen instead is to grease the palms in the tony executive suites of these lobbyist firms and try to get any resolution knocked out. At least that’s how it was under LDP. Maybe with the new Hatoyama Government, a different approach will be taken

Debito is of course on this story as a prominent and topical civil rights matter. Debito’s written about it for years, and hopefully someone in Chris Smith’s office will follow up with him as a resource.

But out of all the elements of this story, the thing that you might find most shocking is that the abandoned father was turned away at the embasssy (consulate) gates. When I read about it, though, I asked myself: Why doesn’t this surprise me?

I haven’t had a good chance to write about it, but like I’ve said, I think our U.S. embassy really drops the ball when it comes to issues of supporting Americans here in Japan. The ones who live here for a time, and even the ones who are here to get their kids back.

Does that Harper’s article shed some light on why the Embassy staff gets in a tizzy if an American shows up at the gates? (“Uh-oh. This might mean we don’t get our way about some military request! Or we might get a call from Bob Michel’s lobbying firm!”)

What exactly is that OSAC (Overseas Security Advisory Council) doing to protect guys like Christopher Savoie? Isn’t Noriko Savoie a threat to American interests? Seriously, if OSAC is running around identifying “threats to American interests” in Japan, isn’t someone who absconds with the kids in violation of Tennessee law just that kind of threat?